Need help or have a question?

Immediate imaging of cores after they are split preserves an invaluable archival record of each core section prior to any oxidation effects. Precise depth-registered images can be correlated with other data sets or used when describing core.

The Geotek Geoscan V colour line scan camera captures images with a high dynamic range, allowing comparisons between light and dark cores. Averaged image data can be automatically converted to a text file of red, green, and blue values to facilitate quantitative comparisons between cores and other down-core measurements.

Single lines of image data are collected sequentially down the core. Line-scan images are far superior to area camera images because they do not suffer from uneven lighting, spherical distortion, montage or “stitching” effects. The entire image is suitable for calibrated sub-millimetre image analyses.

Images can be collected over the full core width between 100 and 1000 lines per centimetre, corresponding to 100 and 10 micron pixel sizes, respectively. Images are output as 48-bit RGB TIFF images but are quickly and easily converted to JPEG or other formats as required. Each Geotek core section image has a companion XML metadata file, containing important metadata pertaining to the core section and imaging conditions. A ruler can be generated next to the image, depicting either depth in core section or depth in core.

The camera is factory-calibrated and a standard photographic 18% grey, or 90% white cards are used for field calibration, enabling images to be qualitatively or quantitatively compared to each other.

The normal scan time for standard (50 micron) resolution is 3 minutes per metre. Scan time increases for the higher resolutions.

The Geoscan V has automatic focus, aperture and light control routines built in to the Geotek imaging software. The software now guides the user through the camera and lighting set-up to optimise image exposure consistently and simply. 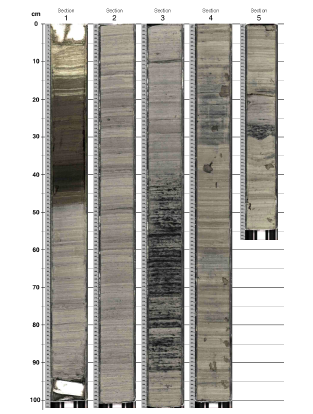