Posted at 15:59h in Latest News, Palaeoclimate by Georgia Hudson

The British Ocean Sediment Core Repository Facility (BOSCORF) at the National Oceanography Centre (NOC) is a globally-recognised institution that conducts critical palaeo-environmental research to help us understand and predict our rapidly changing climate. Locked within sedimentary cores are climate records that are crucial for modelling future climate change. Using the Geotek suite of MSCL and X-ray instruments for non-destructive analysis can reveal Earth’s rich climate history, while preserving the core material for further palaeo-environmental studies. 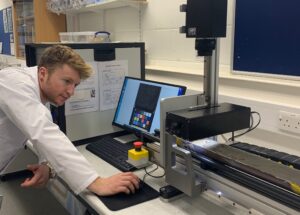 BOSCORF was originally established by the Natural Environment Research Council (NERC) in 1997 to provide facilities that underpin the research required to deliver NERC’s strategy ‘The Business of the Environment’. Geotek have worked with NOC since 1994, and BOSCORF since its inception. Over the last 27 years, we have provided innovative non-destructive core analysis systems, culminating in a Geological Society special publication in 2006 on New Technologies for Core Analysis (Rothwell & Rack, 2006). BOSCORF have a range of Geotek equipment including the Geotek Core Splitter, the MSCL-S, the MSCL-XYZ and the Core Imaging System (CIS), which together have scanned over 15 km of marine sediment at measurement resolutions of less than or equal to 1 cm per point.  These data have been published as part of numerous peer reviewed articles and journals (https://www.boscorf.org/publications). 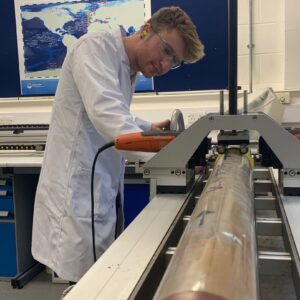 Today, Geotek MSCL systems still serve as an integral step in the BOSCORF workflow. In Matthew Hunt’s (Queen’s University Belfast) recent NERC PhD project: “Sedimentary Records of the Evolution of the Melville Bugt Ice Stream”, the Geotek MSCL-S was part of the first phase of core analysis. Physical properties collected using the MSCL-S will be used to help distinguish various lithofacies such as the deposits of submarine landslides, which provide important clues of the past climate conditions. Matt explains, “when interpreting the geological history of the retreating ice stream, these data may reflect how the ice stream advanced or retreated over time as a function of changing climate”.

Another recent BOSCORF project has analyzed 170m of extremely valuable marine sediments, recovered from thousands of metres of water depth, using all of BOSCORF’s Geotek equipment.  The cores were taken as part of the NERC-funded expedition “Understanding Hazardous Seafloor Sediment Flows in the Congo Submarine Canyon, Offshore West Africa” led by Principal Investigator Prof. Peter Talling, (Durham University) on RRS James Cook (JC187); results of this expedition are soon to be published.

MSCL data and MSCL-CIS high resolution core photography of marine sediments are also being used to support Dr Aggeliki Georgiopoulou’s (University of Brighton) project to determine the sedimentation patterns in the Charlie-Gibbs Fracture Zone, which is the largest and longest-lived of Mid-Atlantic Ridge fracture zone in the North Atlantic. Unique stages of sedimentation have already been identified from the non-destructive Geotek data.

Figure 3 – An MSCL-XYZ and CIS data extract from a core sample acquired from the Charlie-GIbbs Fracture Zone, which is part of the Mid-Atlantic Ridge. The dotted and red line in the image shows how the high resolution (0.5 cm spacing between points) data can be used to define three separate stages of sedimentary deposition. Data by: Dr Aggeliki Georgiopoulou’s (University of Brighton)

The latest addition to BOSCORF will be the Geotek’s ScoutXcan X-ray Imaging system, capable of performing multi-angle 2D X-ray radiography and pseudo-3D laminography. Dr Suzanne Maclachlan, BOSCORF Curator explains “the UK’s environmental science community does not currently have adequate access to facilities for X-ray imaging of sediment cores and so the purchase was science-community driven. This will be an exciting new opportunity for UK researchers to collect rapid, high quality X-ray radiographs to visualise the internal structure within their core samples. It is anticipated that ScoutXcan will be in high demand as a result of the launch of the NERC’s RRS Sir David Attenborough (SDA), with its giant piston coring capability.  BOSCORF aim to collect 2 km of X-ray imaging annually with the new ScoutXcan!” 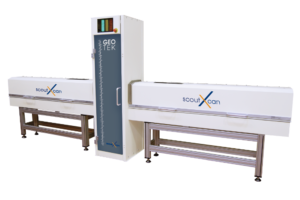 Geotek are very proud to have worked with BOSCORF for over two decades. It is an excellent example of how Geotek core analysis equipment has assisted and will continue to play critical roles in the understanding of past environmental change to help predict future geological climates.