22 Years of Multi-Sensor Core Logging in the High North

Posted at 16:13h in Palaeoclimate by Georgia Poulton

The Department of Geological Sciences (IGV) at Stockholm University (SU) was established as the Geology and Mineralogy department in 1881. Today, the IGV is the leading centre of marine geological and geophysical research in Sweden, and is internationally recognised by its ongoing contributions to Arctic marine geosciences. The department houses an extensive array of analytical instruments that deliver important research on marine and lacustrine sediments. After receiving investment funds from an infrastructure grant in 1997, IGV acquired a Geotek Multi-Sensor Core Logger (MSCL). Since then, the MSCL has played a critical role in the acquisition workflow of geological data. Dr Matt O’Regan, a research scientist who maintains the MSCL system at SU, informs us that “the MSCL remains a central research tool within the Marine Geology and Geophysics group, and a cornerstone for our Marine and Lake sediment analysis lab”. 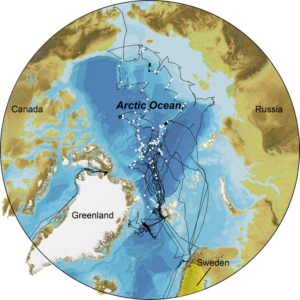 Figure 1. Expedition cruise tracks of the I/B Oden in the Arctic Ocean. White circles indicate locations of sediment cores logged by SU’s MSCL during the past 20 years.

Since installation at the university, the MSCL has acquired lithological data from core samples recovered on 11 icebreaker led expeditions, totalling over 1200 meters of Arctic marine sediments alone. Many of these Arctic expeditions were joint ventures between Swedish and American, Canadian, Danish and Russian scientists, governments, and funding agencies (Figure 1). The marine geology, glacial history, and paleoceanography of the Arctic Ocean continues to be a major research focus at SU (Jakobsson et al., 2014; O’Regan et al., 2017), complementing a 50 year legacy of marine science in the Baltic Sea. After 22 years of service the MSCL system continues to show value as Matt explains, “rapid acquisition of detailed lithologic data made possible by automated core logging systems allows for a wide range of geological, marine and environmental research questions to be addressed”.

It is not always possible to wait for your data to be acquired in the laboratory. The rugged and field-proven attributes of the MSCL have seen the system at IGV travel multiple times into the Arctic, and even down to the Antarctic on-board the Swedish icebreaker I/B Oden (Figure 2). Giving us insight into how the MSCL is deployed and used in the field, Matt tells us that “prior to an expedition we simply pack up the MSCL, ship it to the mobilisation port, and set it up ourselves for offshore use. While offshore, the MSCL is used to provide near-real time feedback on cored sediments allowing us to make crucial decisions in the field on the most appropriate sampling routines or the next coring locations”. 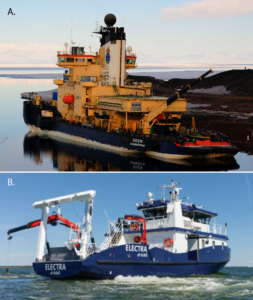 In addition to Polar research, the MSCL is used in varying local and regional research projects. One project used MSCL data to characterise the lithology and physical properties of a 74-meter sequence of deglacial and Holocene sediments drilled in southern Lake Vättern, Sweden’s second largest lake. Lake Vättern sits in a key region for studying the development and demise of the Baltic Ice Lake during the last glacial period (Swärd et al., 2016; 2018). Additionally, the MSCL is used in ongoing environmental projects, like the investigation of submarine groundwater discharge into the Baltic Sea and to characterise deposits of cellulose-rich waste along the Baltic Sea coast that originated from pulp and paper factories prior to regulation. In 2017, Stockholm University’s new research vessel R/V Electra was launched, providing increased access to the marine geology of the Baltic Sea. R/V Electra is equipped with state-of-the-art geophysical surveying systems, and has coring capabilities similar to those used on the much larger I/B Oden.  Given these new sampling opportunities, the MSCL system at IGV is set to play a key role in a new era of Baltic Sea research at SU. 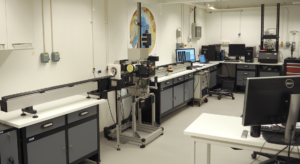 Figure 3. The MSCL-S system installed in the laboratory at the Department of Geological Sciences, Stockholm University.

Even after 22 years of service, the MSCL at SU is still at the heart of sediment analysis within the Department of Geological Sciences, and continues to play a role in the education of future marine scientists. Each year undergraduate students are introduced to the MSCL during their 2nd year, where they integrate marine geophysical and core logging data acquired from the waters surrounding SU’s marine research station in the Stockholm Archipelago. This summer, the system will be working offshore on a Swedish led expedition to the remote Ryder glacier, in Northwestern Greenland. Matt sums up that “the mobility and ease of assembly is one of the things I really value about the MSCL system. The data is such a fundamental part of interpreting depositional patterns and sedimentary facies, that I can’t really imagine working on a long offshore expedition without it”.

To find out more about the research being conducted at Stockholm University please visit: