Posted at 14:20h in Palaeoclimate by Georgia Poulton

Geotek’s X-ray systems allow science and industry to visualise a core’s internal structures, and offer an insight to features in cores that may otherwise go undetected when simply describing from the split surface. Whether it be academic users examining the sedimentary record in oceans and lakes for climate research, or industrial applications in the mining, hydrocarbon and offshore geotechnical sectors, X-ray radiographs and CT datasets provide pertinent information about the core’s quality and depositional processes for sub-sampling or further analyses. 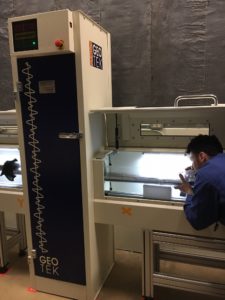 The flexibility of Geotek’s X-ray products to conduct 2D radiography, and 3D CT, coupled with continuous X-ray radiograph acquisition software drove Natural Resources Canada (NRC) to replace their X-ray unit with a new Geotek XCT system. Previously, to obtain a stitched X-ray image, several overlapping x-ray images of a core had to be stitched together in post-processing leading to frequent errors in image concatenation. The Geotek XCT system provided a perfect solution to this previous lengthy process, making the instrument acquisition a prime opportunity to seize.

The Natural Resources Canada XCT was installed in March 2017, and since then whole core and split core X-ray images were acquired from marine sediment cores collected in the 2016 and 2017 field season have been imaged. The high resolution of the X-ray system (30 um to 300 um) has also allowed NrCan to explore previously described cores in an attempt to extract more information from archived materials. The XCT now forms part of the standard processing step in the analysis conducted by the NrCan Marine Sediment Core Laboratory in Dartmouth, Canada, and henceforth all cores collected by the Geological Survey of Canada (GSC), or shipped to NRC’s Core Repository, will be scanned using Geotek’s XCT.

Figure 1: 2D wholecore x-ray image is of the deepest section from a core collected from the 2017 field season.

Figure 2: A co-op students loading and operating the XCT on a split core from 2017