Posted at 13:59h in Palaeoclimate by Georgia Poulton

The Britice-Chrono project has undertaken the task of fitting 50 years of work into 5 years, addressing the urgency to gather data that reveals valuable signs of retreating ice sheets on Earth. It is a five-year £3.7M UK Research-Council-funded project that joins leading scientists at nine universities, the British Geological Survey (BGS) and the British Antarctic Survey (BAS). The marine cruises on the Royal Research Ship James Cook have gathered over 400 seabed cores, which were analysed non-destructively onboard the ship by European Petrophysics Consortium (EPC) researchers from the University of Leicester. 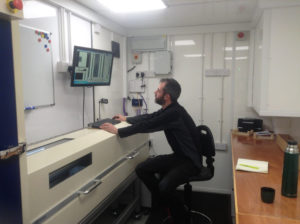 After three years of offshore and onshore sampling, followed by a further two years studying the findings, the first results are being published. Geotek XCT’s high resolution X-ray images were able to expose details unseen by the naked eye. Micro-fine layers of mud, silt and sand can be seen that have settled out of meltwater from the front of an enormous partly-floating glacier. The scans that were collected by Dr Tom Bradwell of the University of Stirling at Geotek’s Core Logging Facility identified when and how British-Irish ice sheets came to an end at the last Ice Age, improving forecasts for the future of decaying ice sheets in Greenland and Antarctica.

The success of the project has caught the media’s attention, with the findings being featured in several media platforms. You can click here to find some of the articles and TV news that the project has attracted.