Posted at 09:15h in Latest News by Alison Cutler 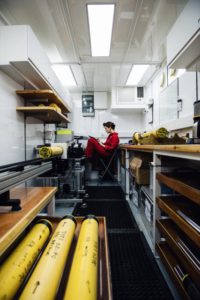 Geotek Limited, in conjunction with the European Petrophysics Consortium (EPC), recently re-designed a bespoke containerised laboratory containing a Standard Multi-Sensor Core Logger (MSCL-S). The use of an MSCL in a containerised laboratory offers the chance to acquire non-destructive MSCL datasets during field operations, and ahead of sample splitting or sub-sampling.

The EPC MSCL laboratory, normally used for International Ocean Discovery Program (IODP) expeditions, was recently deployed on the BRITICE-CHRONO project. The BRITICE-CHRONO project is a five year UK Research-Council-funded project bringing together leading scientists at nine universities, the British Geological Survey (BGS) and the British Antarctic Survey (BAS). The project is determining the time an entire ice sheet takes to decay, and understanding the driving forces by which ice sheets collapse. The project is using the former British-Irish Ice Sheet as an analogue for the present-day Polar ice sheets, and so far has collected over 1000 new geological samples from onshore and offshore.

As part of the BRITICE-CHRONO project, two marine cruises on the RRS James Cook have recovered over 400 seabed cores. The EPC MSCL laboratory was used on both of these cruises, staffed by EPC researchers from the University of Leicester. Dr Tom Bradwell, a Transect Leader for the BRITICE-CHRONO project, told Geotek that in order “to maximise research time, detailed scientific analyses of the cores were conducted at sea, day and night, using a powerful state-of-the-art [MSCL-S]…. Having instant geophysical core-log data onboard allowed the BRITICE-CHRONO team to make key scientific and operational decisions, not otherwise possible, which have contributed to the overall success of the project so far! “

To find out more information about conducting MSCL in the field, or if you would a quote for a MSCL containerised laboratory then contact us.